A new book on John Paul II researched here at The Center for Documentation and Research of the Pontificate of John Paul II in Rome was just published by Lexington books.  Lexington books is an imprint of Roman and Littlefield and is one of the leading Academic Publishers in the U.S. and Great Britain with offices throughout the U.S. and London.  The book is entitled: “The Problem of the Idea of Culture in John Paul II: Exposing the Disruptive Agency of the Philosophy of Karol Wojtyla” by John Corrigan Ph.D. As a Ph.D. candidate Mr. Corrigan lived in Rome and researched at the documentation center from the end of the fall semester of 2014 to the spring semester of 2015 as part of a study abroad opportunity with the Pontifical Catholic University of Chile philosophy Ph.D. program.

The book explores the path of the thought of John Paul II from his early years as Karol Wojtyla in relation to the idea of culture.  It journeys through the debates regarding human knowledge and the problem of human experience as it is presented by the philosophy of being on the one hand and the philosophies of consciousness on the other.  While living in Rome Mr. Corrigan interviewed both Italian Senator Dr. Rocco Buttiglione and Dr. Stanislaw Grygiel for their insights into the popes thought.  Both men were long time friends and fellow philosophers of the former pope and saint.

The book is intended to increase the scholarship and bibliographical research of students, professors and enthusiasts of the thought of Karol Wojtyla / John Paul II through a thought provoking analysis of his journey through the problem of the idea of culture. 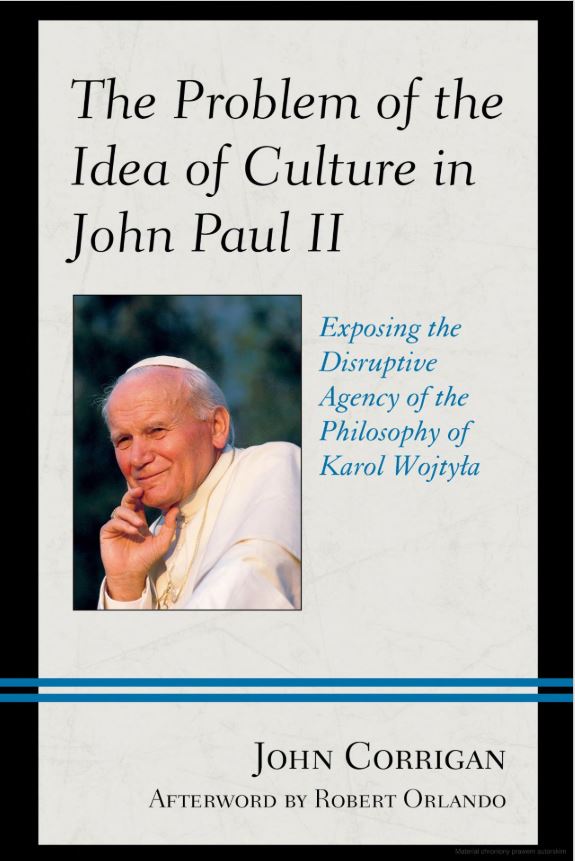 John Corrigan’s knowledge of the philosophical thought of Karol Wojtyla-John Paul II is difficult to surpass. His research and insights are at once fascinating and brilliant. He deserves our gratitude for pursuing this unique work on the late Pole’s profound thinking on the human person and human culture. This is a timeless examination needed just as badly in our time today as it was in the time of Wojtyla.

– Paul Kengor, author of “A Pope and a President: John Paul II, Ronald Reagan”, and the “Extraordinary Untold Story of the 20th Century” – and 11 other books

In this book, Wojtyla’s philosophical reflections on human culture reveal more about him and his work thanks to the original treatment and enriched bibliography of John Corrigan.

In his book, John Corrigan offers a comprehensive and well-researched insight into authentic human culture in light of Karol Wojtyła’s personalistic thought by exploring the intrinsic link between culture and the transcendent character of the human person.