This Symposium was organized by the Foundation of John Paul II – The Centre for Research and Documentation of the Pontificate and the Pontifical Faculty of Theology of St. Bonaventure – “Seraphicum”, in Rome on 28-30 October 2008. The conferences were held in the auditorium of the Department.
The main objective was to present how John Paul II realized the legacy of the Second Vatican Council. The Holy Father saw Vatican II as a “providential event”. For him the Council was focused on the mystery of Christ and the Church, yet open to the world and the human being. The symposium was accompanied by an exhibition displaying Karol Wojtyla during the Second Vatican Council. 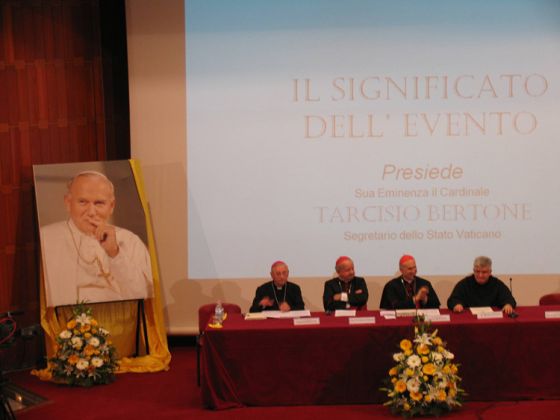 Opening the symposium, the Minister General of the Order of Friars Minor Conventual, M. Tasca, read a letter from Benedict XVI addressed to the participants. In the inaugural session, speeches were made by Cardinal T. Bertone, Cardinal S. Dziwisz, and the representative of the Mayor of Rome.
During the five sessions, there were twenty lectures delivered, which comprised conferences in the form of panel discussions. Session moderators were Cardinals W.J. Levada, C. Ruini, S. Rylko and Ambassador Mrs. H. Suchocka.
Particular sections of the symposium were devoted to separate topics: the Meaning of the Second Vatican Council, Christ who reveals the Unabridged Truth about Human Dignity, the Church as the People of God that pursues Eternity on the Paths of History and the Human Being who hears God’s voice in his conscience and in the challenges that life puts before him. Among the speakers were associates of John Paul II – Cardinal P. Poupard, Archbishops P. Marini, A. Amato, Bishop T. Pieronek and Fr A. Szostek. Also present were eminent scholars of John Paul II’s thought – Cardinal C. Caffarra, Archbishops I. Sanna, R. Buttiglione and G. Weigel. Invitations were accepted from different scientific communities from Rome (Fr M. Augé, O. G. Miranda, A. G. Iammarrone, M. Borghesi, Fr W. Giertych, L. Tortorella), other Italian cities (Cangiotti M., A. Lo Presti, I. Siviglia), M. Waldstein from the U.S.A. and the postulator of the beatification process of Pope John Paul II, Fr S. Oder. The speakers represented the Apostolic See and the following nations: Polish, Italian, Spanish, American, French and Austrian and the cities of Cracow, Lublin and Rome that were associated with Karol Wojtyła. 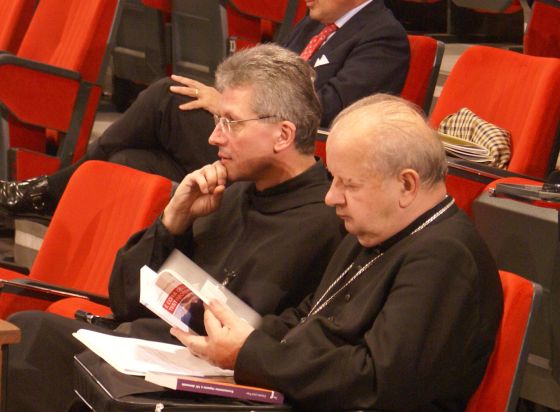 An even wider range of participants for the Symposium filled the “Seraphicum” auditorium. Among them were bishops and priests, but most were the representatives of various academic and church communities from over ten nationalities. Also present were members and friends of the John Paul II Foundation. As well as being provided with the series of lectures, participants were provided with lunch and coffee during the breaks, which constituted an opportunity for numerous meetings and conversation. The Symposium ended with a celebratory dinner at the Polish House.
Thanks to “Ufficio Stampa” and the accredited journalists, information about this symposium reached a wide range of people.
One of the tangible effects of those days is the publication of the delivered lectures “Cristo-Chiesa-Uomo. Il Vaticano II nel pontificato di Giovanni Paolo II, edited by Z. Kijas, A. Dobrzynski, LEV, Vatican 2010; Christ-Church-Mankind. The Spirit of Vatican II According to Pope John Paul II, Paulist Press, Mahwah 2012. 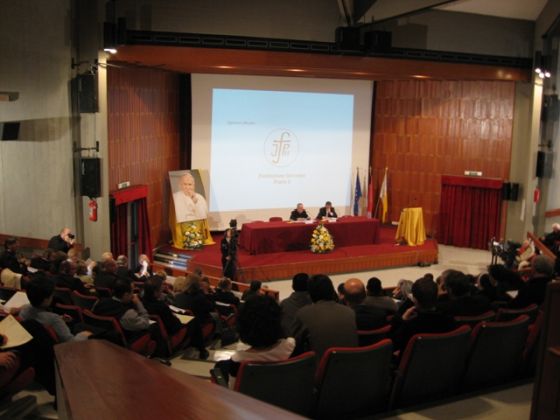