Mary in the faith of the Church

On 23 and 24 October 2012 in Nowy Targ and Ludźmierz a scientific symposium took place. It was on the occasion of the upcoming 50th anniversary of the coronation of the statue of Our Lady of Ludżmierz (15 August 1963). The two-day symposium entitled “Mary in the faith of the Church and in the life of the nation” was organized by the Sanctuary of the Queen of Podhale in Ludźmierz and the Podhale State Higher Vocational School in Nowy Targ (PPWSZ) in collaboration with the Pontifical University of John Paul II in Kraków (UPJPII) and the John Paul II Pontificate’s Centre for Research and Documentation in Rome. 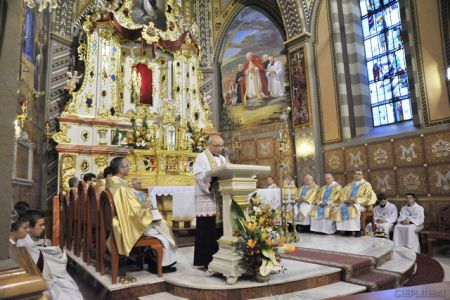 The opening ceremony of the symposium took place at the House of the Highlanders Alliance in Ludźmierz. Nine lectures were delivered during the first day. Archbishop W. Depo, Metropolita of Czestochowa, spoke about the religious and historical significance of the coronation ceremony in 1963, and Fr. Z. Kijas OFMConv from the Vatican delivered a lecture about its moral and existential aspect. Fr. G. Bartosik OFMConv of the University of Cardinal Stefan Wyszynski in Warsaw drew attention to the theological context of coronation which was the Second Vatican Council, Fr. A. Dobrzynski from Rome emphasized the social message of the sermons delivered during the coronation by the Primate of the Millennium – Card. Wyszyński. Msgr. K. Wojtyla. Fr. K. Pek MIC  from the Catholic University of Lublin pointed out the relationship between the coronation of the miraculous statue and the Millennium Act of Consecration of Poland to the Mother of God (1966) and emphasized the relevance of a theology of entrustment to Mary developed by Bl. Pope John Paul II.  Mr. F. Mróz (PPWSZ) spoke about the role of the Sanctuary of the Queen of Podhale in the network of pilgrimage centers in Poland and abroad. Sister U. Ściurka CSFN from Zakopane emphasized the role of the devotion of the Queen of Podhale in the religious life of families. Rev. J. Machniak (UPJPII) drew attention to the various forms of devotion to the Virgin Mary, which are teeming in the sanctuary. The topic of the Ludźmierz Sanctuary being an example of the sacral metaphor, was presented by Ms. A. Fudali (PPWSZ) and Mrs. A. Bentkowska-Mitan (PPWSZ). 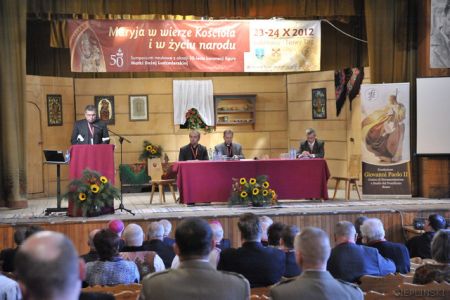 The second day of the symposium was held in the auditorium of the Podhale State Higher Vocational School in Nowy Targ. Nine lectures were delivered. Mr. P. Sadowski (PPWSZ) recalled the history of the sanctuary and the village of Ludźmierz. Mr. A. Surmacz and Mr. J. Jastrzębski, soldiers from Rzeszow, presented the topic of the cult of Our Lady of Ludźmierz in the 21st Brigade of Podhale Rifles. Mr. K. Olejnik from the Adam Mickiewicz University in Poznan, spoke about the Polish custom of placing Marian emblems on the banners, military arms and gorgets. Mrs. S. Trebunia-Staszel from the Jagiellonian University in Krakow, emphasized the role of worship to Our Lady of Ludźmierz by the Highlanders discussing the example of the history of the Highlanders Alliance. Mrs. A. Mlekodaj (PPWSZ) talked about the images of the Queen of Podhale contained in religious poetry, and Mrs. U. Janicka-Krzywda from the Jagiellonian University in Krakow, discussed the subject in relation to the highland legends. Fr. Sz. Praśkiewicz OCD of the Catholic University of Lublin, prepared a lecture on the cult of the Virgin Mary of Ludźmierz in the United States and Canada, among the Polish immigrants. Rev. A. Baczynski (UPJPII), while discussing on the cult of Our Lady of Ludzmierz in the culture of media, drew attention to the fact that the film records of the sanctuary particularly expose the faith rooted in the traditions and the daily life of the local people, as well as the environmental values of Ludźmierz and the surrounding areas. Bishop G. Ryś from Kraków described the dialogue between faith and culture, pointing out  that it must have its origin in every man, and that the sanctuary of the Queen of Podhale plays an important role in the new evangelization. 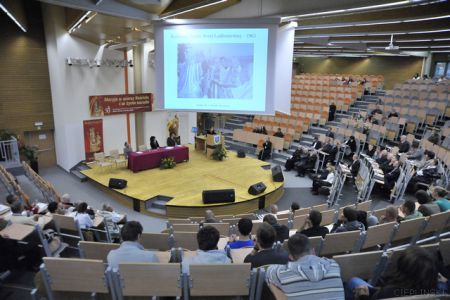 The symposium was divided into six sessions, which were led respectively by: Mr S. Hodorowicz (PPWSZ), Fr. Sz. Drzyżdżyk (UPJPII), Bishop J. Szkodoń (Krakow), Mrs A. Mlekodaj (PPWSZ), Mr Fryźlewicz (mayor of Nowy Targ) and Fr M. Wanat (Nowy Targ). After each session, the participants asked the speakers questions and shared their own reflections. The proper course of the symposium was supervised by Rev. T. Juchas, rector of the Sanctuary of the Queen of Podhale. At the end, he pointed out that the symposium was a form of reflection on religious life of Podhale, an attempt to comprehend the past fifty years, that have passed since the memorable coronation and a look to the future in the perspective of the new evangelization. He thanked the co-organizers and all the people.